Another night behind bars down and disgraced Cardinal George Pell is still none the wiser about whether his last-ditch bid for freedom has paid off.

After two days of arguments, the seven-member full bench of the High Court has reserved its decision on whether to grant him leave for appeal or quash his conviction like he hopes.

Pell, 78, was convicted by a jury in 2018 on the word of a single choirboy that he was sexually abused as a teenager by Australia’s highest-ranking Catholic at Melbourne’s St Patrick’s Cathedral in 1996. 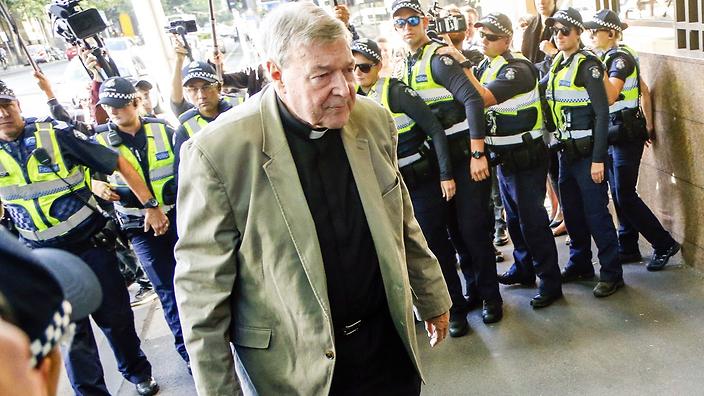 Cardinal George Pell, the most senior Catholic cleric to face sex charges, arrives at an Australian court on 5 March in 2018.

Now a man in his 30s, he too is waiting to see if the conviction, upheld by Victoria’s Court of Appeal in a 2-1 decision last year, will withstand the High Court’s scrutiny.

Pell is one year into a six-year jail sentence.

Victoria’s top prosecutor Kerri Judd QC has argued that the evidence can’t be looked at in an isolated way, instead judges have to consider it all together in determining whether the jury was able to reach a guilty verdict beyond a reasonable doubt.

Considering the testimony of Pell’s master of ceremonies Monsignor Charles Portelli that he was with Pell on the steps of the cathedral when the abuse happened might leave doubt, she conceded.

But not when coupled with the evidence of several choirboys and others who say there were times when Pell didn’t greet parishioners after Mass.

He also described the location as being a room where Pell was robing while his usual sacristy was being renovated.

“If he was going to make this up, if he was fantasising, the place to pick was the Archbishop’s sacristy, not a place that Pell would not normally be in,” Ms Judd said.

But Pell’s barrister Bret Walker SC maintained there was “unexplored possibilities that meant it was not open to the jury to convict”. Cardinal George Pell leaves the Supreme Court of Victoria in Melbourne, 6 June in 2019.

He said the only evidence that Pell’s offending had occurred came from the complainant and that evidence could not stand if it was accepted that other witnesses had been truthful.

“At no stage was there an invitation to regard them as insincere or lying or favouring loyalty over truth,” he said of witnesses including Monsignor Portelli.

The High Court could now take a number of paths including refusing special leave and ending Pell’s appeal hopes.

If leave is granted the appeal could be refused, or it could be granted resulting in the convictions being quashed and Pell being released.

Justice Geoffrey Nettle also hinted that a re-hearing of the original appeal either by the High Court or by sending it back to Victoria’s Court of Appeal was an option.