Trains would not be allowed on an unsafe track and no staff raised safety concerns over the lines where a train fatally derailed in Victoria, the deputy prime minister says.

Authorities say it is a miracle more people were not killed when the Sydney to Melbourne XPT diesel locomotive and five carriages came off tracks near Wallan Station, 45km north of the city on Thursday evening.

A male driver, 54, from the ACT and the female pilot, 49, from Castlemaine in Victoria, died in the crash. The scene of an XPT train derailment in Wallan North, 45km north of Melbourne

The locomotive is now lying on its side and has fallen into the pine trees that line the Commonwealth-controlled tracks. Its carriages are strewn along the ripped-up tracks and the line will be closed for days.

“I reiterate no authority would let passengers travel on unsafe track,” he said at the scene.

“We will ensure that proper answers are found for the bereaved families and making sure these sorts of things don’t happen again.”

But the rail union and Victorian National Steph Ryan say safety concerns about the track have been raised for some time.

A driver and another worker have been killed after the Sydney to Melbourne XPT train derailed at Wallan, north of Melbourne. 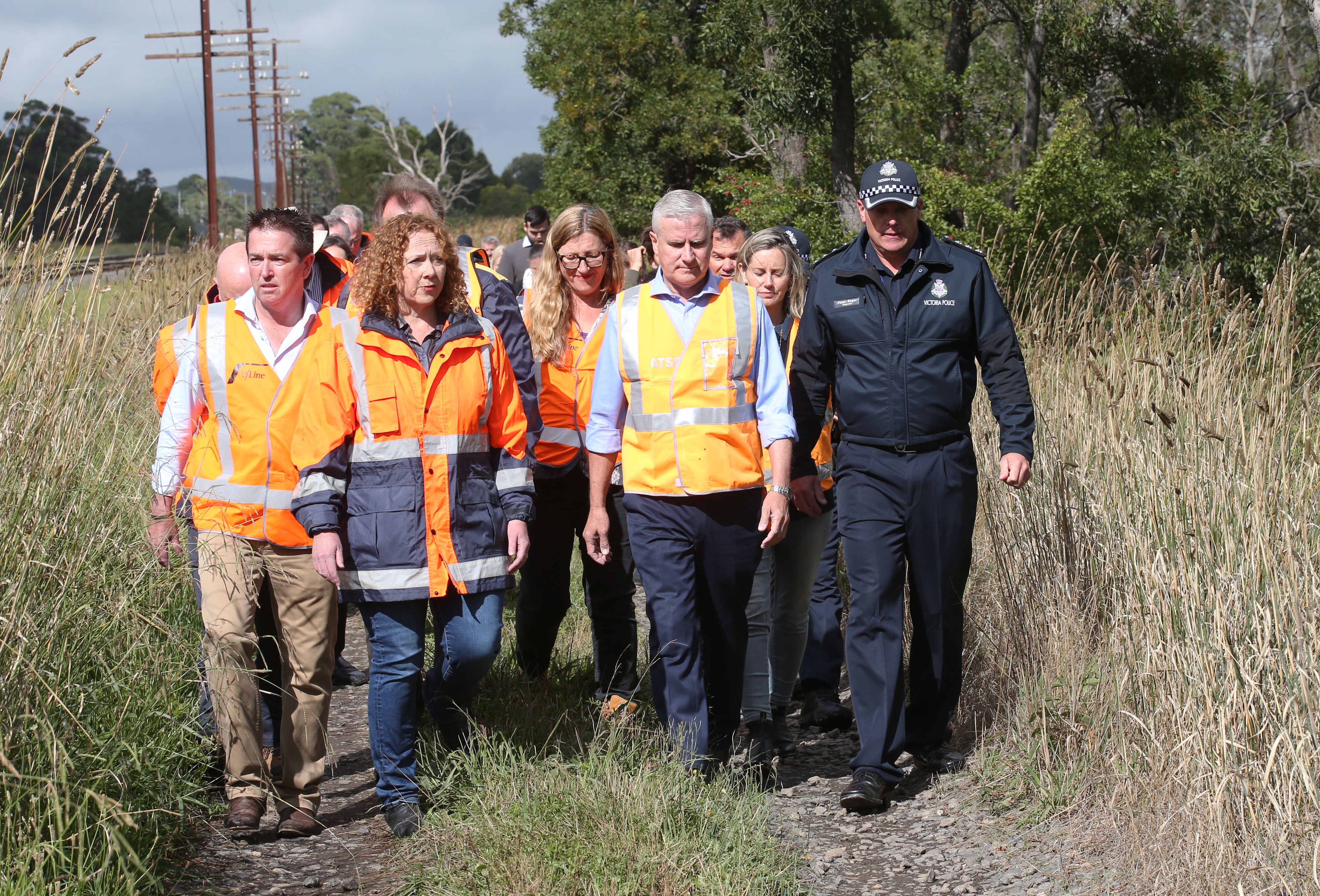 “The … derailment near Wallan Station last night occurred over a section of track over which was awaiting maintenance,” Rail, Tram and Bus Union secretary Luba Grigorovitch said in a statement.

“Conditions were altered and V/Line drivers rightly refused to traverse this section over the past week.”

Ms Ryan raised concerns about the line with state Public Transport Minister Melissa Horne as recently as Tuesday in parliament after another train derailment further up the line in January.

Ms Ryan said the federal government were investing in upgrades, but there were also issues with state trains.

“Drivers have been raising complaints for a long time both about the age and quality of the rolling stock, that V/Line has on this line, but also about problems with the track,” she told AAP at the scene.

There were 160 passengers and crew on board the train, which was running more than an hour behind schedule, when it derailed just before 7.45pm. The train derailed north of Melbourne on Thursday night.

“I think we’re very lucky. It is a tragedy that unfortunately the pilot and the driver were killed in the incident, but I am amazed that the passengers were at least injured or worse than what they were,” Inspector Peter Koger told reporters.

A man in his 60s was taken to the Royal Melbourne Hospital in a stable condition with an upper body injury while 11 others were taken to local hospitals with minor injuries.

Investigators will look at several areas, including whether speed was a factor.

“I know everybody wants answers now but really we’re just beginning our work this morning,” he told reporters at the scene on Friday.

The section of the track where the crash happened was commonwealth-owned. The Australian Rail Track Corporation is in charge of rail maintenance, while the train is managed by Transport for NSW. The scene of an XPT train derailment at Wallan north of Melbourne.

Some passengers claimed they heard an onboard announcement saying the driver was trying to make up for lost time before the crash, but Insp Koger could not confirm this.

Shaken passengers were bussed to Melbourne after the crash, while others were picked up by family.

A Sydney couple who were on their way to visit their son in Melbourne said the crash and its aftermath were terrifying. They have cancelled their return trip.

“You just hang on for grim death. You’re being thrown around, the thing’s going along tilting over and all you can look out the window and just see dirt and debris and stuff flying up past the windows and the track itself is just twisted and bent,” the man said.

“It probably went about 150m before it stopped, there were carriages going sideways – pretty horrifying.”

The man also said train staff had handed out complaint cards to passengers moments before the derailment, after lengthy delays caused by ongoing problems with signals on the line.

He walked back to the site of the initial derailment and said it looked like switches on the track appeared to have directed the train off the main line.

The train had left Central Station in Sydney at 7.40am and was supposed to have arrived at Southern Cross Station in Melbourne at 6.30pm.

The joy of the drive-by birthday party